What is Ash Dieback Disease?

Ash Dieback (Hymenoscyphus fraxineus, previously known as Chalara fraxinea) is a fungal disease was first identified in 2006 and has since spread rapidly across the majority of Europe. Its main victim is common ash but other ash species are also susceptible. Ash Dieback has a few symptoms in which it can be identified, these include: 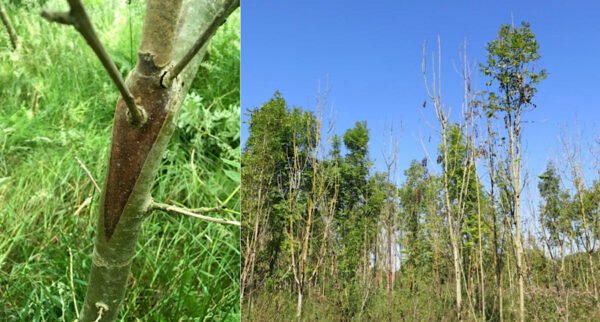 The Reconstitution and Underplanting Scheme was launched by the Department of Agriculture, Food and the Marine in 2013 and was later reviewed in 2018.

Who is eligible to apply?

This scheme is available to the owners of ash plantations which are affected by ash dieback. The stand of ash must be at least under 17 m high and 18 cm in diameter for it to be eligible.

How can the funding be used?

There are three ways the funding can be used, these include:

How can SWS Forestry help?

The input of a professional and registered forester is required to both complete the application form and to commence reconstitution and underplanting works. SWS Forestry have registered foresters located nationwide who can give a professional assessment of the site and advise on its suitability. Not only will we advise on what’s best for the site, but we will complete all paperwork and maps associated with the application. All queries are welcome.

We also have two in-house ecologists who can assist with the application and pre-screening report if the need arises.

What is the process?

One of our registered foresters will assess the site to confirm the presence of Ash dieback disease and for its eligibility for either underplanting or reconstitution. This is done by a stand inspection and a damage level assessment. After which one of our registered foresters will notify the Forest Service, handle all paperwork and liaise with contractors to transform your stand of ash into a healthy alternative stand.

Contact SWS Forestry on 1800 928 900 or info@swsforestry.ie and we can discuss the scheme with you in more detail and can assess your potential site(s) for suitability for the scheme.

We use cookies on our website to give you the most relevant experience by remembering your preferences and repeat visits. By clicking “Accept”, you consent to the use of ALL the cookies.